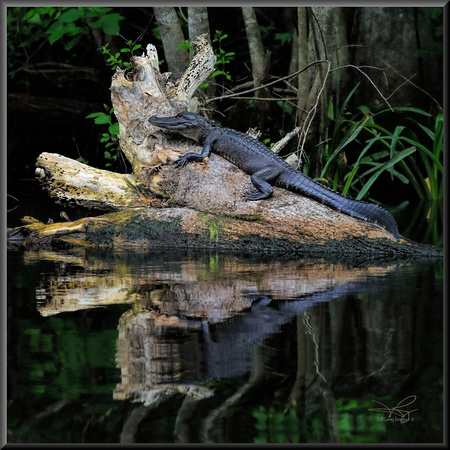 ‘Gators Galore’ started as an idea after being invited by the Cultural Arts Council Douglasville for Douglas County's annual October photography exhibition with the 2019 show theme being a study of 10 works each by six male photographers called 'A Man's View Point'.

The idea was for me to do a theme of images from a man’s point of view that would not be duplicated by the other 5 very talented Metro Atlanta area photographers being featured in the exhibition, Mike Nalley, Bob Kelley, Randy Johnson, Jim Johns and Jerry Frost.

It was decided to do the alligator theme from all the gator images I had taken from my 2018 and 2019 Florida Spring Break Tours. Julie then started to write my artist bio for this exhibition which turned into the following article about her first time on one of my guided tours in Florida.

Click here for a printable PDF version of this Article 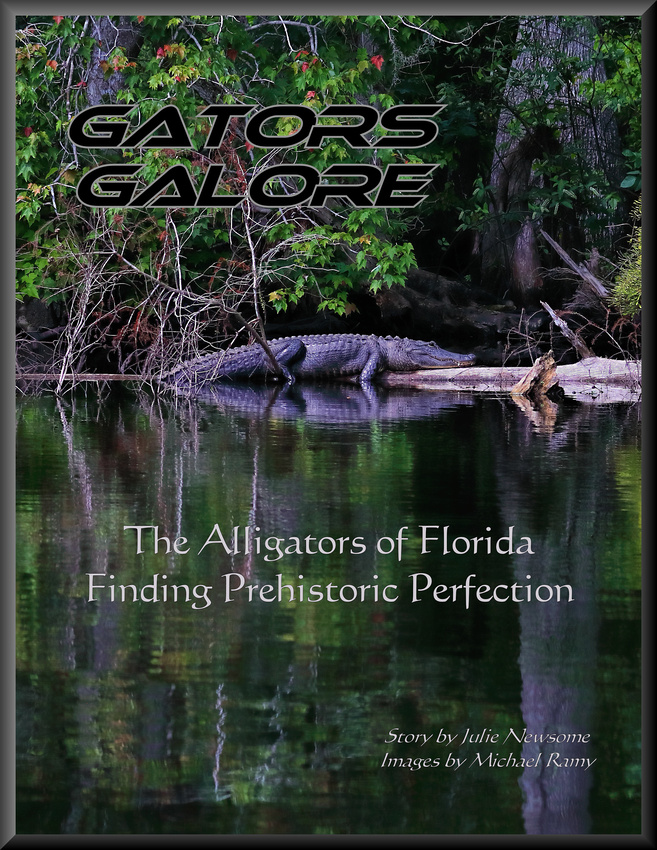 The sense of anticipation is palpable as we load our gear and step down from the dock into the boat and take our seats as the ropes are loosed from the cleats and we shove off. Every exciting moment the jet boat flies across the surface of Little Lake George near Palatka, Florida brings us closer to the left curve I’ve now become familiar with as our turn into the Ocklawaha River. Our focus from the wide expanse of lake gradually narrows into a channel of gently flowing water which zigzags in lazy turns with the current, subtly pulling the craft into a labyrinth of curving, knotted vegetation skimming the banks of the Ocala National Forest. The twisted roots of ancient Cypress and Palm trees gather into a restricting barricade, cloaking swamp marshes that disappear from sight behind the camouflage of light-restricting yucca and palm fronds. 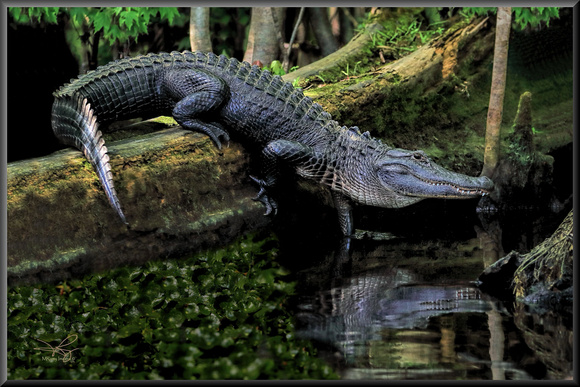 The sky overhead is bright with the clarity of early afternoon sunlight pouring down upon us. I am grateful for the experienced guide at the helm, easily steering the custom designed camera tour boat around the seemingly endless turns we make up river to the Salt Springs. Manatees frequent these impeccably clear waters, gliding naturally camouflaged just below the surface.

Still, the surroundings are vibrantly colorful and teeming with all manner of birds. Waders, birds of prey, and a particular favorite subject for photographers stoked for a challenge; the Kingfisher, a rather small but amazingly swift little bird able to evade capture before you can get the lens of the camera to your face! Look out in any direction! Search carefully enough and there are Osprey and Eagles to be spotted in the tallest of old forest growth perched motionlessly, escaping detection as they spy out a meal. Long legged Egrets wade, fishing through shallow pools hidden beneath massive, coiled ropes of rooted vines. Nesting Great Blue Herons mimic tight rope performers, balancing precariously upon the very tips of the highest tree branches. 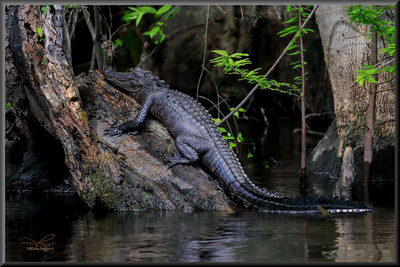 It is a visual assault on your depth of field perception in this primordial world. It’s difficult to concentrate on one item of interest because of the next new thing happening right now, especially when pivoting in the bow seat constructed specifically for photographers, allowing them to easily swivel full circle rapidly in different photographic opportunity at any varying speed the boat may use. It becomes immediately clear that this tour/workshop event has been exceptionally well thought out, designed, and prepared by a professional outdoorsman , wildlife photographer, conservation enthusiast and river guide who has contributed considerable hours of diligent research, personal funding, and years of remote location exploration experience in an effort to develop a streamlined method of safe access into these pristine, yet confusing waterways for those more reluctant to navigate isolated, unfamiliar places alone.

Reaching a bit of sandbar along the river we bank the boat, taking a break for a quick lunch and a stretch, marveling when told we’ve already been gone over two hours. Settling back in for the next stretch of the trip we notice that the temperature has climbed, and we’re told to keep a closer eye out for alligators who like to bask in the sun on the partially exposed Cypress roots at the edge of the water. It’s estimated that Florida alone has a population of all sizes and ages of alligators in excess of 1.3 million found throughout salt and fresh water regions of the state. They can live to be fifty years old, can weigh in at 800 lbs, and are capable of lightning swift movement with an ability to climb screen doors, low lying limbs and fences! This is no place to be exploring alone. Any confrontation with these massive reptiles presents a calculated risk, requiring focused attention and a judicious distance of territorial respect. Distraction is the potential for real danger. Adrenaline pumps and your heart pounds, yet movement must be minimal and controlled. You’ve reached the edge of acute sensory overload! Exiting the cypress swamp via the correct of many channels and returning to the lake before dark is a wise (and welcomed) mandate indeed!

Five minutes later we spot a rather large Gator stretched out on a huge old log, silent and still. The engine idles slowly as our guide expertly manipulates the boat into prime positioning for the shutter bugs aboard to engage this prime situation to capture images of an amazing reptilian giant sunbathing in it’s native habitat. We’re also aware we are being watched! An instant later the dark, rugged shape explodes into the water, whipping it into a boiling frenzy with its tail, disappearing into nothingness as we all regain our composure, and prepare for whatever happens next. I gaze at the now still surface of the lagoon and shiver, knowing that beneath this picturesque, serenely beautiful watery landscape swim magnificent creatures I remain truthfully intimidated by but respectfully in awe of, happily close enough through this exceptional tour offering to recognize an expanding admiration for the natural world. 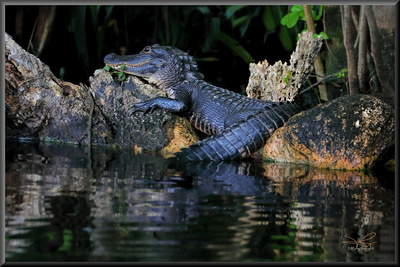 Although it is later in the afternoon and the light has lost the white hot intensity that amplifies keen edges and intensifies color, I’m pleased with the softer angle of light now creating and enhancing the more dimensional shapes of shadows splayed across the drifting current. Cooler air stirs the canopy into a slow motion dance. Everywhere we look is a ready made backdrop to position any creature poised or moving for a camera shot, complete with a plethora of compositional elements for arranging a captivating image. Each individual in our party is fully alert, animated with senses primed, waiting expectancy for the unlimited potentials we’re now certain may happen any moment. Incidental alligators along the way are being counted, and we begin a closer inspection of several individual alligators, noticing such things as missing limbs, tail lengths, overall length, exposed teeth, lying above the water line or partially submerged. We joke about the one who sports a definite grin, albeit in hushed tones!

We drift easily for a bit as it seems the surroundings have become calmer, quieter. Each of us appears to be lost in our own thoughts, and for myself I am simply trying to retain this consuming assault on my senses as our guide silently taps me on the shoulder and points to the water at my left hand, now merely four feet deep and crystal clear revealing two Manatee are gliding beside the boat as it enters in the Salt Springs. Beneath us are numerous, churning "boils" where the force of underground springs bubble up from the depths, tumbling the sand constantly, depositing it around the edges of each individual spring. The water here is mesmerizing, reflecting a multitude of shimmering colors, yet being here in March it’s still a bit too chilly for a swim, however inviting! 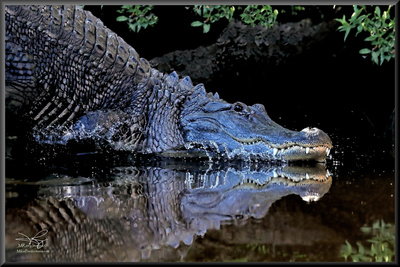 After a brief docking to move and stretch our legs a bit, it’s obviously time to begin the remaining portion of the river exploration and return to the lake in anticipation of the sunset, which a steady gathering of clouds indicate could become a stunning display of color before heading to the lodge for the evening. We take a brief, alternate route back up a minor tributary which will return us to the main river. Once more I’m convinced that without the experienced knowledge of our competent guide, none of us in this tour party would be out here. There are far too many real potentials for danger in this location, and although the boat is abundantly outfitted with Marine Broadcasting and G.P.S. systems, Life Preservers, supplies and rations, I have every confidence in the man now standing behind the wheel steering us at an increased speed, but with a keen eye alert to every movement in the environment we glide through. He alone also knows where we are! It is a bit chilling to consider the possibility of being lost or turned around out here, especially at night! It’s obvious by his calm demeanor everything is under control and proceeding according to schedule.

As the only person on the boat who is currently not a photographer, I am both an artist and a writer, left to sort through all of this incredible panorama unfolding before me in order to convey the amazing beauty of this wild, wonderful river and the creatures who belong here. While the photographers may have an advantage in that instant click of the lens to capture and record the visual perspective surrounding them, I have to focus intensely to record in my memory all that I have witnessed today. Not only have I been included in an incredible adventure into a primordial world to experience the full impact of ecological bio-diversity "first hand", I am changed by it. 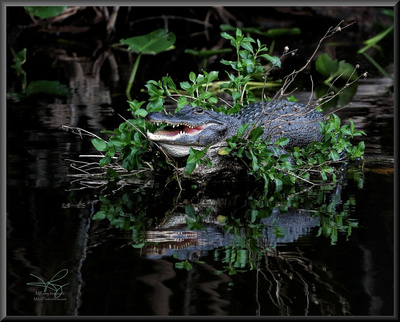 There are countless perspectives I once had of myself as an active participant in wild life advocacy, as I have supported numerous groups such as Sierra Club, Green Peace, and World Wild Life Fund from my earliest college days. This tour of the St. John’s River has left a very deep impression in my heart that I personally must move from the sidelines of environmental concern to take more committed action toward preserving the wonder of the natural world we have the privilege to live in.

When I say that I am a different person now, I know that it is because I finally caught a glimpse of truly remote wilderness through the eyes of a naturalist whose love and appreciation for nature echoes in the passionate insistence with which he seeks to photograph amazing images to bring back and share with others from isolated locations of unaltered beauty. He sees the reptilian monster the world calls an alligator and acknowledges its’ danger; and yet, pointing to the symmetry and patterning of its hide, the power in its jaw, see how effortlessly it slices through the water, completely camouflaged! There is an apparent sense of awe and appreciation for the mysterious forces which meld danger with beauty together in an endless polarity which constantly instigates and supplies an overwhelming desire and curiosity to go farther afield into new territory in search of those hidden opportunities to witness the grand scheme of earth and sky first hand, ‘up close and personal’ as they say. Because I have been favored with an invitation to share in this incredible lifestyle, I anticipate many exciting adventures just waiting to be discovered .